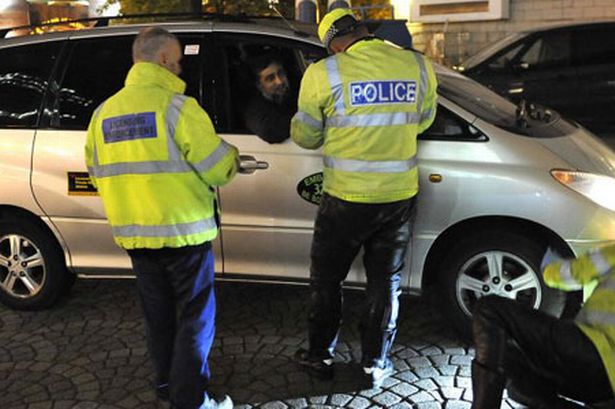 Shocked police say that a ‘worrying’ 75 per cent of Mansfield taxis stopped in a random safety check last week were faulty. Of 21 black cabs and private hire cars pulled up during the spot checks six had had to be taken off the road immediately with officers dubbing some of them “potential death traps”.

They said some of the vehicles were in an “incredible” state with problems including serious braking and steering defects. And they revealed that one taxi had hot oil dripping on to a hot exhaust pipe – which could have ignited at any moment. Only five of the cars tested were defect free and the other 10 checked also had faults that needed fixing. This week Inspector Sean Konsek told Chad the results of the operation were “startling” and warned:

“These are not defects that have happened overnight, they have been allowed to fester and become progressively worse. Some of the drivers did not even have proper steering, which is outrageous. They have seriously compromised the safety of the public. And when you analyse the details of these random checks you come to the impression a significant number of taxis are just not safe. It begs the question should they not be subject to greater checks.”

Police carried out the safety checks in conjunction with Mansfield Council, which is responsible for licensing most of the vehicles stopped After the shock results the police issued an immediate warning that they will clamp down on rogue firms. Said Insp Konsek:

“Where there is evidence available to support the facts that they are deliberately failing to maintain their vehicle we will identify them, prosecute them and they will be taken off the road.”

And he urged Mansfield folk to be wary of dangerous cabs adding: “They have got to make some judgement. A taxi kept in a good state of cleanliness inside and out is normally a taxi in good repair.”

Yesterday Mansfield Taxi Federation backed calls for more spot checks with spokesman Roger Krishan saying firms operating dangerous cabs should be named and shamed rather than all taxi firms being tarred with the same brush. Mr Krishan, who operates ACE-ABC, added: “They are bringing the whole trade into disrepute. The police and council should be doing checks more frequently and on a Saturday night when everyone is out working.”

Mansfield Council this week said it would consider extra initiatives including bi-annual vehicle inspections. Environmental Health chief Roy Smith said the Council already carries out 150 random spot checks every year as well as rigorous annual checks. He said: “We are very concerned as to the safety and integrity of some private hire and hackney carriage vehicles licensed by Mansfield Council and indeed those licensed by other authorities which carry passengers in the Mansfield area.”