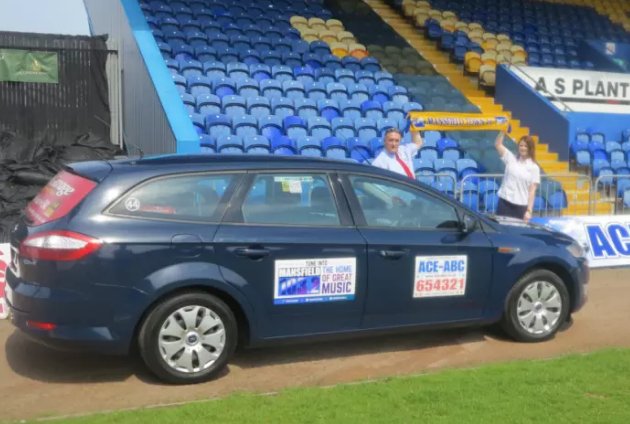 Mansfield Town will be carrying no passengers next season but are pleased to renew the club’s partnership with local taxi firm ACE-ABC. The local business has been a commercial partner of the Stags for the past four years and will again be sponsoring the club for the upcoming 2016/17 season. Lauren Blagden from the ACE-ABC call centre and long serving driver Karl Redfern visited One Call Stadium earlier this week for a photoshoot and Roger Krishan, managing director of ACE-ABC, said he was delighted to extend the partnership. “ACE-ABC Taxis are very proud to be associated with the Stags for another season,” Roger said. “We wish all the players and supporters a great 2016/17 season.” Paul Nyland, commercial manager at the Stags, has been working hard to secure sponsorship from next season and he said he is pleased to see the local community support the club with such enthusiasm. “Local businesses are continually looking at new ways to get involved with the club and ACE-ABC Taxis are always at the forefront of that,” said Paul. “Throughout the four-year partnership with the club, they have shown great enthusiasm and a will to support the club, and we are extremely proud to have them on board for the coming season.”